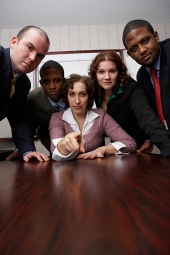 Q: “I am in marketing and I design marketing campaigns for major corporations. My boss recently asked me to design a campaign in six weeks that should have taken three months. After completing the project on time, my manager, director, and vice president want to blame me for running over budget. It seems that when they lowered their bid on the campaign, they forgot to reduce the scope of the project. Consequently, we had to meet the client’s demands at a lower price. My supervisors have called a meeting with me next week, and I am guessing they are going to blame me for the budget overrun. What should I say or do?”

A: To begin with, if this is a major project with a cost overrun, someone in accounting is concerned and wants answers. Luckily there are a number of things you can do so this turns out well for you and your company.

Give the Benefit of the Doubt

If you have no data for the topic of the meeting, don’t assume that they are going to blame you for the budget overrun. If you approach them from the perspective of defensiveness, you may end up creating defensiveness in them as well. Remember that what begins well usually ends well.  Assume positive intent.

On the other hand, let’s assume that they are intending to blame you in the meeting. You will need to have prepared or assembled any instructions or parameters of the project that were communicated to you. Hopefully, you have some form of email or other documentation that was given as instructions for completion of the project, either by management or the client.

If you have the appropriate documentation, you could spice things up a bit by stating, “I keep really good records because it is important to me to meet both the management’s and client’s requirements. As you can see by this email dated _____, I was asked to do ______ and that’s exactly what I did.”

End of story! Have the supporting facts.

Prepare for the Future

Unfortunately, it is not uncommon that others get blamed for doing exactly what they were asked to do. If you think this may happen in the future, then you must always be prepared by doing whatever you may need to do such as having clearly documented instructions and agreed upon guidelines for all the work you do. Having documentation will help you avoid the potential of blame and false accusation in the future.

At no time in the conversation should you offer advice. For example, you wouldn’t want to say, “Well, you could have saved money if you had asked me to…” or “You should have known that the client would have expanded the scope of the project, so you should have just said ‘No!’” Making such statements is blaming them for what they did or didn’t do. This kind of blame is the equivalent of saying, “If you weren’t so stupid, we wouldn’t be in this mess!” Blaming them, even if they are at fault, doesn’t solve anything so just smile and keep it simple.

Take the initiative to ask questions and to identify together issues and responsibilities that would help future projects go more smoothly and come in under budget. Be open to any suggestions that they may offer and clarify anything they have asked you to do differently in the future. You might also put such agreements in an email to manage  expectations and to document  your agreement. Offer support by asking questions and clarifying future expectations.

If this is a project that is assigned with a shortened deadline, planning efficiently will always be crucial to your success. Going forward be sure that everyone that will be involved in the project has input in creating a concrete, agreed upon plan that can be executed. Although it seems like common sense, it is amazing how easy it is to overlook the involvement of others in the creation of a workable plan.  Make a plan to succeed with everyone’s input.

Some individuals think faster than they actually speak. This behavior is the function of their interaction style—the way they think and speak to others. Thinking faster than speaking results in the individual believing that they have communicated their thoughts accurately when the reverse is true. Ask clarifying questions to solidify and identify expectations and don’t be surprised if you hear something that wasn’t communicated originally. Don’t assume anything, but instead ask questions to clarify.

No one is perfect, and only you are in control of you. If you can always assume positive intent, prepare supporting facts, keep your statements simple, avoid giving advice, offer support, plan to succeed, and clarify their thinking, you can increase the likelihood of a successful project. More importantly, you will be able to avoid all the emotional “drama” and blame that usually are present where people attempt to cover their tracks and avoid responsibility.