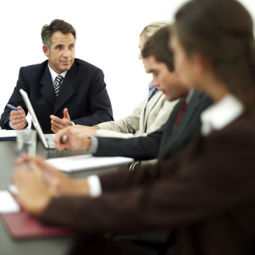 Q: I am a team leader, and I have an individual on my team that I wish would keep his mouth shut. He is constantly making snide remarks about his teammates or openly criticizing their performance. When he does this, there is always an awkward silence followed by less engagement and participation afterward. It’s like he wants to show that he is Mr. Know-it-all. What would you do in this situation?

A: Unfortunately this is a common occurrence on many teams. Failing to address the situation will continue to impact collaboration and erode teamwork, and may even work to undermine your creditability as the team leader. Bottom line—such individuals can hinder the success of the team.

Before I offer some suggestions, notice the impact this individual’s behavior is having on respect, relationships, and results. It is almost certain that the rest of the team does not respect him, and his comments may even lead to lack of respect for the person he is criticizing. It is likely that people avoid being in relationship with him because of what it might cost them: “If he would attack her, he might attack me.” I bet that the other team members probably avoid dealing with him whenever possible. Finally, his behavior is impeding the desired results because of its impact on the group’s dynamics. Here are some actions that you need to take immediately.

In order to hold effective team meetings, you and your team need to create a list of rules that govern the conduct of the team. These rules should address such issues as meeting times, agendas, talking turns, decision-making and problem-solving strategies, and individual behavior. Everyone should participate in creating these ground rules and everyone should agree to them. Ground rules give everyone permission to hold the group accountable for individual misconduct.

Step Up and Speak Up

Group ground rules should help everyone to step up and speak up. If they don’t, then you, as the team leader, must set the example. The challenge in this situation is in determining what you should do in the moment and what actions should be taken after the meeting is over. Say, for example, that an incident of bad behavior occurs during a meeting. In the moment, you will want to refocus the group’s attention and efforts on the task at hand. After the meeting is over, you will want to hold a private conversation with the individual who is causing problems.

When this individual attacks or criticizes someone, move the group’s attention off of the person and back onto the process. It might sound like this:

“I’d like to focus our attention on what happened from the perspective of improving how we’ll handle this situation differently in the future. Can we do that now?”

Notice that this statement ends in a question to increase the engagement of the group on that activity. In a respectful way, this signals to the individual and the group that criticism and belittling of an individual is inappropriate behavior in a team setting.

In a private setting, you want to provide constructive feedback to the individual who attacked one of his teammates. You will want to use the DialogueWORKS Process for holding the conversation. (In fact, we highly recommend that you review the conversational recipe “Addressing Inappropriate Behavior” on our site.)

Focus the conversation on helping the offending individual recognize how his behavior is impacting the person he attacked as well as the rest of the group. Specifically point out the team’s response to his critical remark. He may not be particularly observant in recognizing the impact of his behavior on the group, so you must be prepared to offer specific data points or examples of what happened.

Don’t be surprised at this individual’s lack of awareness—most of us are challenged to see ourselves as we are seen. This particular teammate is likely oblivious to the impact his behavior is having. I recently had an event participant ask me if my hair was really real. Somewhat surprised, I assured them that it is (thankfully!).

Finally, you might also ask this individual to do some self-reflection about why he seemingly feels the need to engage in this type of attacking or critical behavior.

Sum it All Up

To end your conversation, you need to explain that these outbursts or attacks are unacceptable and will not be tolerated in the future. Clearly lay out the consequences of noncompliance if there is not a change in how he interacts with his team members. Of course, this is easy to do if this person reports to you.

If he does not report to you, then this conversation will need to be about influencing him to take a more positive approach to add value to the team’s efforts. Help him to understand the value of his cooperation, contribution, and collaboration in achieving the team’s goals and objectives. Be clear that it is fine to critique or analyze processes, procedures, and outcomes, but that debasing or criticizing an individual is completely unacceptable.