How Do You Manage a Blamer? 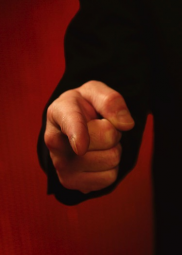 Q: I have a coworker who is quite negative. In fact, he is always blaming me when I don’t meet his expectations. Sometimes I am shocked to learn—after the fact—what his expectations were! What could I do to defuse this person’s blaming behavior?

A: I want to address your coworker’s negativity, emotional reacting, and blaming behavior.

You need to recognize that this person’s negativity is really an outward expression of what is going on inside him. Like the rest of us, your coworker can’t see past what he knows—the negativity you hear from him is expressing his wants and desires in terms of violated values or unmet needs or expectations. In other words, he blames because he wants something he is not getting.

When a person expresses himself negatively, you will need to flip your listening skills in order to understand what is really being expressed: listen to his negative complaining and blaming as an expression of a positive value.

For example, if someone complains, “You never listen to me!” you should ask yourself, “What does he really want?” or “What does she value?” The positive value hidden within this negative statement might be “I have something important to say, and I wish you would listen and understand me.”

If you are ever in doubt about positive values a person is expressing through negativity, you need only ask questions to clarify your understanding of what is important to them.

Remember that “emotion is the mask of meaning.” In other words, a “hot” or negative emotion hides what is really going on in a person’s head. For this reason, we often say that a person’s anger (or any other emotion) says more about them that it does about you. We create our feelings by the way in which we perceive and interpret the event we are experiencing. Before you can begin to explore the person’s meaning so that you can begin to understand him or her better, you will need to defuse the emotions that are masking what is really going on.

Sometimes people are so emotional that it is impossible to defuse the emotion or have a rational interaction. This is because when a person is highly emotional they have gone to a “non-thinking” place in their brain, or the non-thinking part of their brain has taken control. If the person is not able to answer a few questions—or if they actually become more emotional—then you can be sure that you will not be able to have any meaningful or real conversation with them until their rationality returns. You would be well advised to allow them to vent by silently taking their frontal assault or allow them to cool off by giving them some space for the time being.

I once had a manager who always blamed me when things did not turn out as planned. He even blamed me when I followed his instructions exactly and things did not turn out as planned. In a calmer moment one day, I told him that I often felt shamed when he blamed me. He apologized, but I continued to experience his “shaming” behavior and saw him do it to others. It seemed like he was using shame as a means of motivating us to new heights of performance. Not surprisingly, his tactic had the opposite effect—people are simply not motivated by abuse or disrespect.

When people are using blame, I find it helpful to listen for the topic or context addressed in their blame. Listen carefully, and you will notice that the blame—the violated expectation—is centered in one of these four specific areas:

Purpose would focus on the goal or assignment you wanted to accomplish. If you failed to achieve a goal you might hear something like:

“That’s not what you were supposed to do!”

In this case, you would want to ask questions that would help you to clarify the purpose:

Process deals with the way in which you attempted or completed an activity or task. Here’s how a “process” issue might be addressed:

If you heard that, you would ask questions to clarify process:

Performance deals (obviously!) with how well you performed or executed a particular task. For example,

“You messed that up!”

“Didn’t anyone show you how to do this?”

Notice that these statements are directed at your ability to do what was asked. So your questions should clarify the person’s expectations about your performance:

or
“How could I improve?”

If someone is blaming you as a Person, remember first of all not to take it personally! Someone once told me that people resort to attacking a person when all their reason has given out—so if someone resorts to a personal attack, you could infer that they haven’t been able to put their finger on what the real issue is. Your questions can help explore the reasoning behind the statement: is the purpose, process, or performance at the root of the problem.

Remember that blame is a way of avoiding responsibility. You want to be accountable and take initiative to identify the specifics behind the blaming statements by asking clarifying questions. If the blamer can’t give you specifics about the blame they are assigning to you, then there is no way you can address the issue and improve the situation.