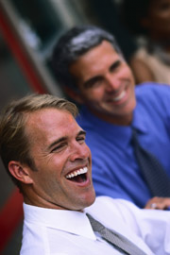 Q: I have a dear friend who seems to relish taking verbal “jabs” at me. Over the last couple of years, the number of his sarcastic comments has really increased. Probably because I have become more sensitive to my friend’s verbal assaults, I have started to notice that a couple of my teammates are using sarcastic comments in our meetings. Why all the sarcasm? Is there anything I can do about it?

A: “Sarcasm” was first defined in the 1500’s as meaning “to tear flesh, gnash the teeth, or speak bitterly.” In our day, sarcasm seems to be used for a variety of purposes and in various levels of intensity, ranging from humor to humiliation. When humor is used to poke fun at oneself, the effect is generally harmless. However, when someone uses sarcastic statements or humor as an attempt to humiliate or degrade another person, that behavior is inappropriate and hurtful.

When people use sarcasm, they are communicating contempt or disagreement with something another person is doing, thinking, or proposing. Think of sarcasm as a veiled attempt to show disagreement or displeasure.

Sarcasm is a mixed message where the words that are used convey one message, but the tone of voice, the eyes and gestures, and the inflection of the words in the sentence convey a different meaning. In sarcastic messages, the intent of the conversation is lost.

Suppose someone says,  “Well, that’s a GREAT idea!”  or  “You sure gave that idea a lot of thought!”

On their face, the words in each sentence should imply admiration or praise for the person’s ideas or efforts. But depending on the tone of voice and body language the speaker uses, it could deliver a message that may be interpreted as:  “That’s a stupid idea!” or “You didn’t think before you opened your mouth and removed all doubt!”

Recipients of sarcastic jabs usually understand loud and clear that the other party disagrees with them, but that is all that they understand clearly. The person’s real thoughts and feelings are left wide open to interpretation. And once the recipient has been offended by a negatively-interpreted sarcastic remark, they will usually either disengage or respond with sarcasm. The situation can quickly spiral downward from there. In this situation, neither party is likely to make the effort to get past the sarcasm and discover the real meaning.

It sounds like this is the situation between you and your friend.

I have often wondered why so many people use sarcasm. I believe that it is an effort—ultimately an ineffective one—to avoid accountability for stepping up and holding a potentially difficult conversation. It is almost as if sarcastic people believe that sarcasm gives them permission to be rude to others, as long as it can be labeled as “humor.”

Sarcasm is also used to avoid responsibility. For example, if you have ever asked someone to explain or justify their sarcastic comment, you may have heard them claim, “Oh, I was just kidding. Forget what I said.” Then they may continue being sarcastic about the same topic. This behavior tells clearly tells you that they really weren’t kidding—because the attacks continue.

In group settings, sarcasm is used to express disagreement, but it can also be used to recruit others to a particular way of thinking while at the same time demeaning the opposition and their position or ideas. For example, in a team meeting someone might sarcastically comment, “This is what we really signed up for, isn’t it? Let’s move on!”

When a person makes a statement like this, he or she is really trying to recruit the group as a type of social constraint. In other words, when the group responds with laughter and implied agreement to the sarcastic comment, the presumption is that the target will be either isolated or intimidated enough by the group that they will not respond further for fear of looking bad or stupid. Obviously, when the person with the dissenting opinion is cowed by sarcasm, then the specifics of the disagreement go unexplored, which not only hurts the group’s efforts, but also ultimately makes the person look bad. In reality, this is a subversive tactic that creates a hurdle few stalwart souls know how to overcome.

Try any one or all of the following strategies to deal with sarcastic individuals.

“I noticed you offered a sarcastic comment (Data)."
"I’m thinking you don’t agree with something I’ve said (Interpretation). What’s up?”
“Do you disagree with my idea?”
“Do you have a better idea for solving this challenge?”

Notice that these questions offer the individual an easy entrance into a difficult conversation that they may not know how to begin.

“When you say____, I feel hurt (feeling) because I thought we were good enough friends that you could openly disagree with me. What is going on?”

Establish that your current relationship with the person is what is most important to you and that you want to understand what they are thinking. Also, don’t hesitate to request that they simply stop using sarcastic behavior.

When an individual uses sarcasm in a group setting to express disagreement, try these strategies:

“Does anyone disagree with the course we are pursuing?”
“Do you all agree with this approach?”

If the group agrees, then focus on the sarcastic individual and summarize as follows:

“We all seem to agree with this course of action. Is there anything you’d like to add?”

If they are brave enough to disagree, then explore their thinking and facilitate a discussion that will result in a benefit to everyone.

NOTE: Even if the person uses the sarcastic comments to make a good or valid point, don't agree with them. This gives them permission to continue making sarcastic comments. No matter what you personally think, turn the conversation over to the team or group and let them decide the value of the comments or issues that have been raised.

“I am committed to this project, our group, and the company. Is this the course we want to follow?”

If the answer is “yes,” then move on, and know that after you have done this you probably won’t be the focal point of others’ sarcastic remarks in the future.

In addition to the motivations mentioned above, some research suggests that people use sarcasm as an attempt to establish their superiority or affirm their superior intellectual capacity. What we can agree on, however, is that sarcasm is an attempt to “put-down” someone by making them the focal point of a verbal jab. Hopefully, we can all be more sensitive to others and approach our disagreements in a more productive and respectful manner. I hope these suggestions are helpful.