Tips for Handling Challenging Conversations during the Holidays 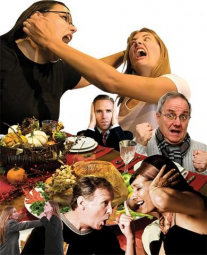 The holiday season usually offers many opportunities to practice your best conversation skills. Family members who usually don’t see each other, come together, which may present challenges because of the way that they act during these family gatherings. Some individuals seem to go blatantly out of their way to make others uncomfortable. Still others lack any sense of social decorum or awareness of how their behavior negatively impacts others. Unfortunately, we usually choose not to say anything to the offending party because they are family. Instead of saying something and causing potential conflicts, people often sit quietly and say nothing. After years of exposure to these unaware family members, resentment can build to the point where people don’t want to attend family gatherings any longer.

There are any number of typical roles that people may demonstrate in these gatherings. Each situation demands that you be aware in the moment of what is happening in order to manage the dynamic more effectively and mitigate negative outcomes as much as possible. Here are a few roles that are common in family dynamics and some suggestions for improving the “situation.”

“The Competitor”— Sometimes when some families get together it seems every conversation turns into a form of verbal competition. This occurs when people begin to compete to determine who can be the loudest, who can tell the best story, who can tell the worst story, or who get in the last word on any topic. The whole conversational dynamic focuses on some form of “one-upmanship.”  If everyone gets pulled into this dynamic, the whole conversation ends up spiraling out of control, people become disrespectful or downright nasty, and everyone ends up being offended.

What Can You Do?—To manage the conversation and achieve a more positive result, you must recognize what is happening in the moment—become an observer. This requires you to not only participate in the content of the conversation, but also observe what is being said by whom and how the message is delivered. If you can identify the competition once it starts, then you can take steps to shift out of this dynamic. You can do this by asking any number of questions to create a different dynamic. For example you might ask any of the following:

·        “I have had a real challenge with … this past year. Could anyone give me some advice on how to address this issue?”

·        “Would anyone be open to playing a game, watching a movie, or telling their favorite holiday story?”

Notice that in this situation, it’s important to recognize when the competition starts and then ask questions to change the focus of the conversation or shift to a different activity entirely. Take responsibility to change the dynamics before things get out of control.

“The Storyteller”— This person always has a story to tell. And the story they tell usually deals with some form of injustice that they perceive they have suffered at the hands of another person. You could probably bear to hear this story one time, but the problem arises when they tell the same story over and over again. At first it seems like they want your advice about how to handle the situation more effectively, but when they continue to rehash the same situation over and over again, you realize that something else is going on. That is when you need to recognize that they need something that they are not getting.

What Can You Do?— When you experience this dynamic, acknowledge their story using empathy for their situation. Saying something like, “I can understand how difficult it was for you to go through that,” will help. If they continue to tell the same story, in private you might say something like, “I have heard you tell me the same story three times in the last day. I was wondering if there is something that you need from me that I am not providing. What can I do?” Notice that you are pointing out their behavior to them and causing them to think about why they continue to repeat themselves. You are also increasing their awareness about what they want from you. Doing so should help them to make a different choice about how they are handling the issue.

“The Put-Down Artist”— Sometimes when families get together, there is one person who takes it upon him or herself to provide negative feedback to one particular person. They seem to believe it is there solemn duty to criticize or make denigrating remarks in front of everyone present. When this happens everyone is usually so uncomfortable that no one says a thing. This behavior fosters disrespect, frustration, and strong emotional feelings on the part of the recipient. Such behavior also forces family members to take sides.

I have often wondered why some individuals would engage in this kind of behavior. Most of us would have the common sense to offer others the benefit of our perspective in private rather than in public. Perhaps this is a tactic for gaining a sense of superiority of self, an attempt to put the other person down with the intent of elevating oneself in the eyes of others, or a tactic to insure that the other person will not respond in kind. Whatever the reason, a group gathering is not the time and place to single someone out.

What Can You Do?— When you know that you will be in the presence of this type of person, it is important to select an intent or purpose for engaging in any conversation with this individual. I decide beforehand that my purpose is to maintain a respectful relationship with that person and their family members. Then, when they engage in their usual antics, I am not reactive to the negative feedback they offer. I can then thank them for their feedback and not be affected by their negativity.

You should also remember that when people offer negative feedback, what they offer says more about them than it does about you. They are sharing their perspective of a situation. You might try asking for facts, evidence, or specific examples to support the feedback they offer. Don’t be surprised if they don’t have any support for their view. If this is the case, then what they are sharing is based more on their opinion or view than what current reality may be.

The “Drama” Queen or King— I had a father tell me about how his adult daughter would sit in the middle of a group of adults and text and play on her phone for hours while everyone was interacting when they got together as a family. He became so frustrated with her behavior that he called her on it. She replied with, “Well, no one cares what I think anyway.” Making such a comment obviously drew more attention to herself and was irritating and rude to others. It was almost like she was seeking further validation that what she had to offer to the group interaction was of no value.

What Can You Do?— Certainly, calling her out was not the answer. However, her father could have involved her in the conversation by asking her opinion on a topic that they were discussing. Or he could have shifted the conversation to some other family activity.  If the behavior continued over the course of the gathering, he could have pulled her aside and simply ask her to go to another room rather than blatantly ignoring everyone in the room.

“The Winner”— Someindividuals have to be right no matter what. It doesn’t matter if you have information or evidence that runs counter to what they are proposing. You are “wrong” and they are always “right” particularly when it comes to topics like politics. Sometimes such conversations make you wonder if these individuals are capable of having a mature discussion. You need to recognize that they are not. To be wrong would run so counter to what they think or who they are so they just can’t accept any other view outside their own view.

What Can You Do?— Don’t take what they say personally. Recognize that they may be incapable of rationally reasoning through an issue because of their personal commitment to that idea. When I find myself discussing an issue with such an individual, I find it easier to offer some non-provoking or non-confrontational statements and to abandon any notion of coming to a more shared, rational perspective. Here are a few you can try:

The holidays with family and friends can be a great time of year or can be quite challenging. If you can remember to observe the dynamics of any conversation, to listen for the need behind the story, to have a positive intent, to not be derailed by the drama of others, and to accept the irrationality of others, then you can not only maintain your sanity, but also maintain the respect necessary to build more positive relationships.  Happy Holidays!!