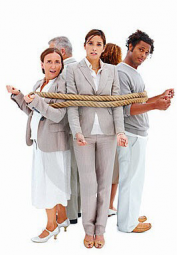 This is a question I have contemplated for a long time. Recently my exploration became more focused because of a challenge that occurred in our office.

As I was getting on a plane to fly east, a client I was traveling to visit, informed me that the training materials we had shipped two weeks earlier had never arrived. I immediately emailed my assistant to alert her and asked her to reach out to the client to remedy the situation.

When I arrived in New York, I was picked up by a car service. En route to Connecticut, I texted my assistant to check on the situation. She assured me that FedEx confirmed that the materials had been delivered. Meanwhile, the client sent me numerous emails during the day claiming that the materials had in fact not been delivered. I asked my assistant whether she had called the client during the day. No, she responded, she had not--because she did not have my direct contact’s number. I was dumbfounded by her inaction. After all, she has access to all of my email accounts. All she had to do is open my email, find the contact’s number, and call him. Unfortunately she did not take the initiative to do as I had hoped she would.

Luckily, the limo driver was a retired Pitney Bowes executive. He asked me if I knew the town and zip code where we had sent our package. After I told him, he said that the client had given us the wrong zip code. Sure enough, he was right!  With that information, we were able to track down the materials and get them to the client in time for the training.

Although we were able to resolve the issue, it could have been avoided. Once I got home, I had the opportunity to hold a REAL conversation with my assistant about what happened and what prevented her from taking the initiative in solving the problem at the time.

In talking with other executives and colleagues, I have found that they often experience similar issues in their organizations. This is what I have discovered about why people fail to take initiative:

This is another way of saying that people do not see past what they know. In other words, when a situation comes up that is entirely outside that person's experience or expertise--and it is something that they have never even stopped to consider--then that person will have a hard time even perceiving what’s going on. We can be functionally blinded by our own expertise and experience. When our rationality is bounded, we might find it easier to ignore the problem and hope it will just go away.

When confronted with a task or situation entirely outside their experience or expertise, people lack the knowledge to do what is asked. They just don’t know how, and they might not even know what questions to ask in order to begin to grasp what is required. They may not understand the directions they are given. Or they might not be willing to run the risk of being perceived as stupid or inept, so they do not dare to ask clarifying questions that might reveal their ignorance or ineptitude. They say nothing and complete the task incorrectly or not at all.

Sometimes when people are asked to do something they have never done before, they feel like they are being asked to walk out of the light and into the darkness of the unknown. This is an uncomfortable place to be, especially if they believe there are negative consequences for a wrong decision or action.

You may be surprised to learn that for some people, simple inaction seems to be a viable strategy. These people indicated that in their experience, if they do nothing, then someone else (usually a manager) will step in and do it for them. Managers, take note that this style of “rescue management” teaches people that they don’t need to be accountable, while itrobs them of the experience of learning from their mistakes. Those whom you rescue in this way do not learn to think critically or develop viable solutions to their challenges. They simply assume someone else will pick up the slack.

Recently I was trying to help one of my children develop some critical thinking skills. He replied, rather agitatedly, "Dad, cut out all these questions and just tell me what I am supposed to do!” As leaders or parents, we are often sorely tempted to bail them out. And we usually do. But we should realize that in the long run, we are not doing the people we rescue any favors.

Some people are so task-driven that they are more concerned about working through their list of to-do’s than about taking on a new task that may have no clear path to solution. Their list has become more important than the skill of figuring out a new solution.

Others have so much on their plate that they simply cannot process one more assignment. These overworked people will often shut down or refuse to take on anything else, keeping solely to the tasks they have been assigned. Unfortunately, they often do this without telling anyone about their overload, so the challenge or the new assignment goes unaddressed.

Shades of this dynamic may be present in all of the other dynamics as well. I have heard people say that found "not knowing" to be quite convenient. "Ignorance is bliss," they say. In other words, I can’t be held accountable for what I don't know how to do or what I simply don’t do. These "ignorant" folks actually go so far as to say that they would rather accept the consequences for failing to act at all, rather than face the consequences of doing the wrong thing.

Obviously, all of these responses are nothing more than excuses people make to rationalize their failure to act. If you expect your people to take initiative, you need to (1) clearly outline your expectations and (2) assess their ability to perform what is asked. (3) Consider the person's current workload and (4) stress the priority of what you are asking over their normal tasks, if that is appropriate. (5) Take time to coach, teach, and mentor individuals who are uneasy about taking on responsibilities outside their area of expertise--you may need to encourage people to think independently to solve problems as they arise. (6) Finally, be willing to let people learn from their mistakes and wildly celebrate their successes.

How have you been able to encourage others to take the initiative? What worked well? What didn’t work?

We would love to hear from you in the comments below--just be sure you are logged in to your DialogueWORKS account, and you can make comments or reply to others' comments. Click on the link at the top right-hand corner of this page to create your account if you haven't done so already!