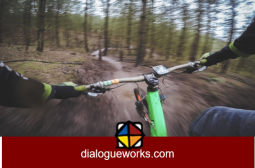 After waiting hours in the emergency room, we were finally able to see a doctor in the ER. Wisely, the doctor chided him for not wearing a crash helmet as he told him how lucky he was to only break his shoulder. He then previewed for us what it would take to surgically repair Matt’s shoulder. As we headed to the car shortly before midnight, I said to Matt, “Well, at least you didn’t crack your skull!” My wife quickly and sarcastically responded with, “That was some really good empathy, dear.”

Being able to empathize with another is the apex of being a great listener, but as I demonstrated, it is not that easy to do. Rather than demonstrate empathy, we are quick to judge or offer advice. Because we care about the situation or the person, we might ask what we think are caring questions.  Using the example of my son, other questions I thought of asking him were, “Why didn’t you wear your helmet?” or “What made you think you had enough experience to take that hill?” Both of these questions aren’t really very caring at all. The underlying message in the first question is, “You were an idiot for not wearing your helmet.” And the message in the second question is, “You didn’t have enough experience to run a hill that steep. You were stupid for attempting it.” Our negative judgment or criticism, along with our advice, shows up at light speed and comes out of our mouth before we even have time to stop and think about the impact that our words have on others. Such statements as these add insult to injury and do not make the other person feel like they are understood, nor does it make them feel like they want to talk about anything.

You can do empathy by making a reflective statement of the emotions you are seeing in the other person, as well as trying to understand the thinking behind those feelings. For example, in the case of my son, rather than saying, “At least you didn’t crack your skull,” I could have said, “I can see that you’re upset you got hurt and are sad about not being able to do everything you planned for this summer. I imagine you’re especially upset about not being able to go to Africa on your humanitarian trip.  Would you like to talk about it?” Making such a statement would have allowed him to share more of what he was thinking and feeling in the situation rather than shutting him down.

How Not To Do Empathy

Common phrases to avoid are those that are associated with judgment or criticism, words such as “at least,” “because,” or “but.” The use of the phrase, “at least” is commonly used to highlight the consequences but ignores the person’s feelings such as, “At least you didn’t break your head.” The word “because” often shows up as justification for the offered advice, as in, “You shouldn’t have attempted that hill because look what happened.” Finally, “but” is sometimes used to highlight what action was taken that did not yield the desired results, as in, “I asked you to do this, but you did not follow my direction.” Unfortunately, these phrases come to mind easily, seemingly with little thought on our part, and do more harm than good.

How to Do Empathy

When I was first asked by one of my mentors to make an empathetic statement to someone who was disappointed there was no butter for the freshly baked rolls, I said, “I can see that you really like butter.” My mentor laughed as he explained that I have made a judgment about the rolls rather than making an empathetic statement. Try as I did, I didn’t do very well. My mentor then said, “Here is how empathy sounds: There really is nothing like warm, sweet melted butter on warm rolls, is there?”

In an attempt to make empathy easier, try asking yourself this question before making any kind of a statement:

“What would this person have to think and feel, in order to say or do that?”

Taking the time to answer this question forces you to observe their feelings and try to understand the thinking behind their feelings. Then you must formulate what you will say. If you will use your answer to this question as the basis for an empathetic statement or question, then you will not make the mistake of offering criticism, judgment, or advice.

Here are some additional keys for improving your empathy with others:

Focus your attention on others. Pay attention to the feelings, actions, and words of others. You have to be able to see what is going on in order to make an empathetic statement.

Get out of your head. If you are preoccupied with what is going on with yourself, you will never be able to be present with another person. Answering the question above is designed to move you out of your head and into the realm of the feelings and thinking of the other person.

Suspend your negative judgments of others. We are less likely to be empathetic if we are judging others or their behavior. You must suspend your judgments and criticisms of another and their behavior if you are going to understand what is really going on with them.

Practice deliberately. Be present with the other person for the sole purpose of listening and empathizing with what they are sharing. Don’t worry if you don’t reflect their feelings and what is behind them accurately. They will usually correct you if you are inaccurate in your attempt, but they will greatly appreciate your efforts.

Overcome inequality. Research suggests that people who are of a higher socio-economic status have a harder time relating to others of lower status. At work, those who are higher in leadership or managerial responsibilities are often less connected to others. It is interesting that our power and position may impact our ability to recognize and understand the feelings of others. Taking the time to empathetically listen to others will help us stay connected to those who contribute so much to our personal and professional success.

Empathy is a skill that is easily improved if practiced. Our ability to demonstrate that we understand another’s feelings and thinking will increase our ability to gain information and to create those personal connections that are often missing in our conversations with others both at home and in the workplace.

Rose Cypress | August 26, 2016 | REPLY
What can I say except thank you and guilty as charged. Despite my awareness of not connecting with people as well as I would like to be able to do, I've just been stuck without insight till now. You've really cut to the crux of the matter. Now hope to apply your insights. Rose of Cypress
John Stoker | August 26, 2016 | REPLY
Rose, I am also guilty as charged. Being empathetic really takes deliberate effort to practice and be patient, but I am finding that it is worth the effort. AND, I can attest that it does get easier. Thanks for responding. Best! j
Larry Danks | August 26, 2016 | REPLY
John, Matthew, Matthew, I know how it feels. I broker my left clavicle four times. After the first few times, as soon as I did it again, I knew I was a goner. The good news is that you're a young guy. It smarts, but you're going to heal and it's not likely to bother you too much later.. I'm 71 now and it hasn't hurt a bit for about 50 years! But believe me, I can empathize. Good luck, Larry
john Stoker | September 1, 2016 | REPLY
Larry, Thanks for telling me that I will alright. At first it was really hard for me, but I am alright now. Thanks for thinking of me. Matt Stoker
Nazanin | August 29, 2016 | REPLY
Great post thanks a lot. What i would i like to also understand better is that from my understanding the purpose of empathy is to understand the client or person we are talking. I wan to know at the end will it benefit the growth of the person and helping them to move forward? because saying for example "There really is nothing like warm, sweet melted butter on warm rolls, is there?” how it will help client beside the connection we create? and not judging them ?! on the other hand i do understanding judgment and saying negative sentences can do more damage than any good as mentioned above. will appreciate if someone can help me with this? thanks
John Stoker | August 29, 2016 | REPLY
Nazanin, I am not saying to use the warm rolls analogy with a client. I used the example to illustrate how difficult it is to do empathy. However, let's say that you have sold a client some software that is not working the way that it should and the client calls to complain. There is nothing wrong with saying, "I hear your frustration about the software not working like it is supposed to. I am sorry about that. Can we explore what may be causing that to occur?" Notice that I tried to empathize with their emotion and the thinking behind it. I also apologized for the inconvenience that they are experiencing and then made an effort to move forward. Note that any time you think it might be important to create a connection with someone, then you want to do empathy to increase the likelihood of that connection. Hope this helps? Thanks for reaching out. j