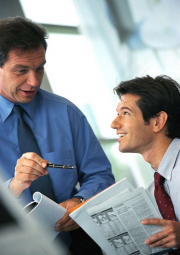 Q: I heard you speak at a conference recently, and you mentioned that it is important to prepare to hold a potentially difficult conversation. You didn’t elaborate, though, and I would like to know some specifics about how preparation can help a conversation be more successful.

A: Preparing to hold a potentially difficult conversation will dramatically increase the success of the conversation. Sometimes the way our brains work can sabotage our interactions; people who don’t prepare just might fall prey to their thinking. Three different aspects of the brain play a big role in a conversation: the unconscious, subconscious, and conscious brains.

This part of your brain is a “reactive protective” mechanism whose sole purpose is to ensure the survival of the species. For example, if you take a jab at a person’s face, they might instinctively blink, jerk back their head, or even attempt to block your hand—all because of an unconscious reaction to protect themselves. The reactive behavior occurs as a measure of self-protection or preservation. There is no room for conscious reasoning in this process—it takes the brain only milliseconds to assess the situation and send signals to different parts of the body calling for battle stations for self-protection. The process occurs unconsciously—or outside any deliberate or logical processing on your part. It seems to just happen, whether you want it to or not.

This subconscious part of your brain is a “protective illogical” mechanism. While the unconscious brain protects your physical person, the subconscious works to protect your “non-physical” self—the mental and emotional part of who you are. It focuses on the system of values or the rewards you have assessed, accumulated, or constructed over time through your life experiences.

For example, suppose that every time you have attempted to hold a difficult conversation, the results have been catastrophic… or even just painful. Perhaps the other person became emotional and erupted with dramatic fireworks. Or perhaps they refused to engage, clamming up and avoiding you. If these results were repeated again and again, then they would begin to form your experience and expectations about attempts to talk about difficult topics.

Continuing the example, suppose you now need to give feedback to a coworker who is not doing their fair share of the work. At the very suggestion of holding such a conversation, your subconscious brain might kick into overdrive and start feeding you the following messages:

“This won’t go well! It has never gone well!”

“You don’t know how to do this—You’ll blow it again!”

The subconscious part of the brain is extremely efficient. It even conjures up supporting emotions to make sure its message is effective, emotions such as anxiety, nervousness, or frustration. These feelings make us uncomfortable, so we conclude that difficult conversations “don’t feel right” or that “I’m not comfortable talking about this!”

If the subconscious protective-illogical part of your brain is allowed to call the shots, you will either avoid the conversation completely (a “flight” response) or attempt to hold the conversation while in a heightened emotional state (a “fight” response). Many, many people do interact with others based on this “fight or flight” mindset, at least to some degree. And since this mindset is primarily focused on preserving the self in one way or the other from any perceived attack, there is no room or energy left to allow the person to learn from others by exploring different perspectives of tough issues. It is by nature a limiting way to interact.

The conscious part of your brain functions with a “logical-rational” mechanism. As we mentioned, the unconscious and subconscious parts of your brain are stimulated by events or accumulated past history. The conscious brain, on the other hand, is stimulated by words that are formulated into questions. Questions allow us to logically and analytically explore the rationality of our thinking—the thinking that our subconscious would prefer to move us to fight or flight.

Let’s look at the previous scenario again, this time for an example of how the conscious brain works. Suppose you recognize that you are feeling uncomfortable about talking to your coworker about his lack of productivity. The little voice in your head is screaming, “This won’t go well!” If you engage your conscious brain instead, you might ask yourself—and answer—the following questions:

“What evidence do I have that the conversation won’t go well?”

“What could I do and say to be successful?”

Asking yourself a number of questions will engage your conscious, rational brain. You will begin to defuse whatever negative emotions you are feeling, and you will be better able to assess the accuracy and completeness of your thinking. In other words, you will be better able to recognize where you are missing information and where you might have made assumptions that might just as well be downright wrong. This will increase your confidence and your ability to create the conversation you want to hold.

Prepare the conversation successfully by asking yourself questions. The specific questions below will help you evaluate and prepare in the context of your particular circumstance. We have arranged the questions by topic; you will want to consider all of these factors because they will influence your delivery as well as the specific material and data you decide to bring up in the conversation:

Your answers to these questions will help you organize your thinking about what you want to accomplish in the conversation, how you should best approach the topic with the particular individual, and what facts you are basing your opinions on.

You simply cannot afford for an important conversation to be “hit or miss.” And if you don’t know what you are aiming for, how can you ever tell if you have hit it? Preparing the conversation by thinking it through as we have outlined above is the only way to allow the conscious, logical-rational part of your brain to be in the driver’s seat. Anything else is simply too unpredictable and dangerous.

That’s why I say, “Prepare or beware!”