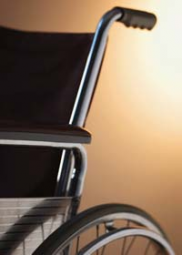 I have been haunted this year by an event that occurred in January.

I am a member of a men’s service organization that meets weekly to learn from each other and plan service activities in our community. One of the elder members suffers from a pseudo-Parkinson’s disease. Over the years, I have watched his condition deteriorate from using canes, to a walker, to a wheelchair and most recently to a motorized wheelchair. You know what they look like—a seat out of a Star Wars fighter mounted on wheels and controlled by a small joystick that allows the driver to turn right or left or to move forward or backward.

On the day in question, he and I arrived at the door of our meeting rooms at the same time. I smiled and patiently held the door for him as he nervously worked at navigating his “chariot on wheels” through the entrance. It took several attempts, but he finally got inside.

I said nothing to him at the time—which has been the source of my problem. A few days later, he complained to his wife of not feeling “quite right” and moments later died in her arms. I have wondered again and again why I held the door for him on that day but didn’t take the opportunity to say “Hello,” get down where I could make eye contact, and ask him how he was doing.

After all, we had been friendly for years. He was a wonderful person, and he was interesting to talk to.

He was always doing amazing things—several times he retrieved old refrigerators from the dump and converted them into smokers which he then gave to people. He was known for making hand-dipped chocolates. At one time he dug up all the large rocks in his backyard and painstakingly built intricate rock retaining walls to terrace the hill behind his backyard.

But what most people in our community remember about him are the hand-carved and intricately-fashioned canes he made for others. When I attended his funeral, the walkway up to the church entrance was lined on both sides with hundreds of canes that he had made and given away to others; a tribute of gratitude to his creativity and generosity.

We are all so busy doing all the things we fill our lives with, that sometimes we just forget or take for granted the people with whom we live, work, and play.

We seldom even realize how much it might mean to someone if we would take a moment to offer a word of recognition, appreciation, or interest.

A number of years ago, we presented a Performance Management course at a major telecommunications company. I came in early to prepare the room for the day and was met by a class participant, who asked me if any members in the upper management of the company ever attended the training we were holding. When I asked her about the reason for her interest, she told me that she had worked for the company for 23 years, but with all the important projects she had worked on and the long days she had put in, no one had ever said, “Thank you.”

I have taught people all over this country and in Europe how to hold REAL conversations.  One of the comments that I frequently hear is, “We spend all this time learning how to talk about difficult topics, but we spend little time recognizing and appreciating others.”

I invite and encourage you to look for and create opportunities to speak up and offer kind words of appreciation and recognition to others. Don’t miss the opportunity.