10 Behavioral Cues to Help You Separate Fact from Fiction 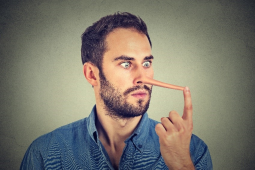 Years ago when I worked as an attorney, I remember someone telling me that it was easy to spot when someone was lying. All you had to do was notice whether they would look at you or not. I remember laughing to myself and thinking that if the liars knew that, all they would have to do is to give direct, sustained eye contact to counter that notion. I came away thinking that this suggestion was not very helpful. Indeed, now we know enough about different communication styles to realize that people with different styles manage the way they make eye contact very differently. Some folks do not look at you at all, but that is no indication that they are not intently listening to you.

So how can you detect if someone is lying to you? First, I think it is important to note that there are few true liars on the planet—there are just a lot of people who are afraid to tell the truth. Second, when observing a person, you must learn to look at clusters of behaviors to determine if a person is misrepresenting what they are saying. Gestures, tone of voice, and the words used should align when a message is delivered. When such behaviors don’t match up, then you know that something is amiss.

There are a number of behaviors that might watch for that are great indicators that people aren’t telling the truth. Here are a few that I was trained in at law school and that I have observed over time.

1. Watch their eye contact. Because it is normal to look away when one is uncomfortable, the person who is lying may make direct eye contact in a pronged stare. It is almost as if they are daring you to not believe them. It is a way that they may try to intimidate you or force their position. In contrast, others may avoid eye contact, and seem distracted when talking to you.

I have also noticed with my children, just before telling their story, they will raise their eyebrows before they begin to speak. This along with other “tells” are helpful to notice. The “tells” I am referring to would include any abnormal or unusual behavior that they don’t normally engage in along with some of the tips mentioned below.

2. Notice the movement of their feet. If a person begins to rock back and forth on their feet, this is a good indication that their foundation is unstable, that they are vacillating back and forth. Obviously this kind of observation doesn’t signify a lie if the person has anxiety issues or nervous system challenges.

I also like to notice what direction a person’s feet may be pointing. If a person has one foot pointing at the door, they may be indicating their lack of comfort with what they are saying while telling you that they would rather exit the current situation.

3. Verbal-nonverbal misalignment. If a person is telling a very sad story or giving an excuse for their non-performance, but their tone of voice is positive and upbeat and they are smiling, this disconnect is a good indication that something is awry.

4. Hands signal discomfort. When people are lying their hands may be a dead give- away. A person may cover their mouth or eyes. The covering of the mouth is indicative of covering the lie. They may cover their eyes when answering a question as if to signal psychologically that they don’t want to see the other person’s reaction to the story they are telling.

Hands may also be placed on the head, throat, chest, or over the abdominal area as one tries to protect themselves from being vulnerable. Others may take a more aggressive approach with their hands by pointing or making angry gestures. This often happens when they have been found out, so they take a more defensive or aggressive posture to try to make their point.

5. Watch what they do with their mouth. When people are lying, they will often swallow just before they speak, as if they are swallowing down the truth because they don’t want it to come out. Or they will cover their lips and mouth with their hand or their knuckles as if to dam up or stop the flow of communication. This is an indication that they are withdrawing from the conversation. Also I have noticed when speaking to my teenagers that they will just slightly smile at the corners of their mouth between sentences as if to say, “I am so going to get away with this, and you will never know.”

6. Repetitiveness or talking too much. Often when people are telling a lie they feel the necessity to tell more than they need to so that you will believe them. So they will say the same thing over and over, or they will provide you with too much detail about things that you never even asked them about. This is a clear sign that they are trying to convince you that their story is true.

7. Difficulty speaking. If a person is lying they may find it hard to speak. The body’s nervous system decreases the salivary flow during times of stress. Consequently, the mucus membranes in their mouth dry out, so they have difficulty speaking while under the pressure of telling a lie. They may also begin to repeatedly clear their throats.

8. Fidgeting fingers. We have already mentioned the switching weight on one’s feet, but it is not uncommon for a person to fidget with their fingers or other parts of their body. Fidgeting is a sign of nervous energy that is expelled because the person is afraid that you will not believe them. So the person may repetitively tap their index finger to their thumb very quickly, play with their hair, pull on their ears or lips, or constantly shuffle their feet. If you catch a person in a lie, watch for them to put their hands in their armpits as they fold their arms across their chest. You might also watch for them to curl their fingers under as if making a fist.

9. Intensified breathing. Heavy breathing is also a sign of stress that occurs when someone is lying. If you can’t notice when a person breathes, watch for their shoulders to rise and fall, for their voice tone to soften, or for their voice to even crack. They will appear breathless due to an increase in their heart rate and blood flow.

10. Watch body positioning. A few others cues to notice include watching for the person to step back if standing or lean back from you if sitting so as to disconnect from you. Although this behavior may also be indicative of someone who needs more personal space in which case this would not be an indication of lying.

Also notice what people do with their legs while sitting. They might also cross their leg and then begin kicking the air with their foot. Often when lying a person will also start grooming themselves or tidying up their surroundings.

When observing these clusters of behavior, you must also be aware of the context. I have a son who is ADHD who is constantly fidgeting; he just can’t hold still. Consequently, I know that his fidgeting is not an indication of telling me a lie, but rest assured, I am watching for a number of other behaviors.

Some people are uncomfortable telling the truth because of perceived consequences that will befall them. Others intentionally try to cover their mistakes or poor performance by fabricating a story that will relieve them of responsibility. Whatever the reason, it is helpful to recognize some of the nonverbal cues that signal that something else is going on. Hopefully you can turn your recognition into a search for the truth in a respectful and effective way. Remember to seek understanding of those behaviors that you may not normally notice.

Do you struggle with communicating effectively? Do you need to improve your emotional intelligence?

Join me for my complimentary webinar, "3 Must Know Principles for Increasing Your Emotional Intelligence."

We will walk through practical ways to defuse defensiveness in others as well as yourself. You will learn the 5 values that create the majority of workplace challenges and disruptions.